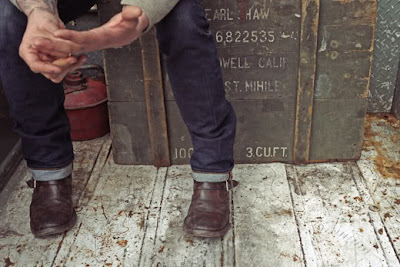 What was most difficult about it?

Same as always: getting to the point where you can believe in the book's world as a viable reality. I don't mean a "realistic" one – just one that's carried by its own momentum. Once you get past that point of critical velocity or whatever, the whole project flies – but it's a fucker to get there.

What, if anything, would you do differently if you were starting the book again?

Once you've written a book and look back at the process, it's like the build-up to a goal. You wouldn't change anything, even the missed passes and accidental ricochets, because they led to what turned out to be the thing.

Tom McCarthy talking about C. on The Guardian

Photo: Matt Winter by Nicholas Maggio on A Time to Get via CrankReport

Posted by erica lorraine scheidt at 10:07 AM